A Spanish church is now at the centre of artistic outrage, following the efforts of a handicrafts teacher in restoring a painted wooden effigy of St George.

Although well-intentioned, the restoration has caused an uproar in the town of Estella. 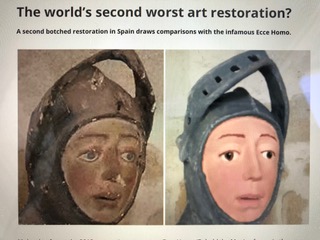 The statue dates back to the 16th century and depicts St George locked in battle against his old foe, the dragon.

Now the sculpture is barely recognisable after such an extreme intervention; the Saint’s rosy pink cheeks, wide-eyed stare and bland armour give a cartoon-esque look.

The restoration attempt was carried out at the request of the parish authorities of the Church of St Michael. Estella’s Mayor Koldo Leoz told the Guardian: “The parish decided on its own to take action to restore the statue and gave the job to a local handicrafts teacher. The council wasn’t told and neither was the regional government of Navarre.”

The Mayor also commented on the condition of the statue after seeing it in person, “It’s not been the kind of restoration that is should have been for this 16th-century statue. They’ve used plaster and the wrong kind of paint and it’s possible that the original layers of paint have been lost.”

Experts looked at the painting to assess whether the restoration is reversible and if the statue can be restored to its original state.

By 2016, the botched restoration had attracted more than 160,000 visitors to the Sanctuary of Mercy church to see the painting and purchase souvenirs. The number of tourists visiting the town increased from 6,000 to 57,000, and helped Borja through economic difficulties.

Whether the 500-year-old statue can be salvaged is still to be determined. One thing for sure is that St George is now the face of a new battle, unlike any he has encountered before. 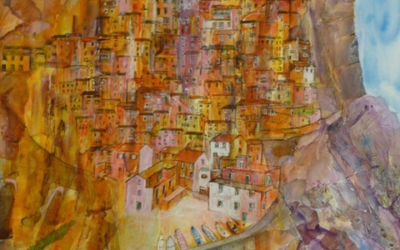 “From Here to the Sea” Exhibition

YOUR INVITE.  Location: Comfort of your own Home When: Friday 12th June Time: 7 pm GMT View: https://theframe-gallery.co.uk/ or https://www.facebook.com/TheFrameOdiham The Frame Gallery in Odiham welcomes you to this ‘virtual’ exhibition of wildlife paintings from the...

Artist Sarah Pye, known for her nature-based impressionist pieces, has announced that she will be holding her first virtual exhibition, Virtually Summer, on Friday 22nd May. YOUR INVITE.  Location: Comfort of your own HomeWhen: Friday 22nd MayTime: 7 pm GMTView:...